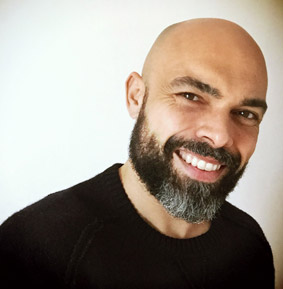 After completing my studies of Graphic Design in Barcelona's Llotja School of Arts and Crafts, I developed a series of training sessions at Studio Mariscal for several months. Later on, I joined D'Arcy DMBB Barcelona Advertisement as an Art's Director.

In the next five years I gained experience as an Art Director at Lowe FMRG, where I worked in such client accounts as Carolina Herrera, Tous, Anne Môller, Rimmel, Lotusse, Bach, Visualis, JVC, DKV, Nestle, Flora, Pastas Gallo, Truck, Advance and Calvé among others. During the same period, I had the chance to develop a one-month stage at Pentagram Studio Design in London where I was managed by Fernando Gutierrez, Art Director of United Colors Of Benetton magazine and other important projects.

One of the most interesting assignments I have received was to collaborate with the Catalonian Government (Generalitat de Catalunya) and the local TV channel TV3 in the making of the illustrations for 195 episodes of the cartoon series "Lua i el món". After this assignment, I launched my career as a professional illustrator working in a series of exciting children's books for a campaign called Audi-Attitudes. In this project I co-worked with important Spanish writers like Elvira Lindo, Ray Loriga, Suso del Toro and Soledad Puertolas.

Ever since then, I have worked regularly in partnership with various magazines: Glamour Spain, Glamour Germany, Flare Canada, Vive, Yo Dona, Interviu and Clara among others. My illustrations have also been included in El País, Cosmopolitan and the Japanese publication +81. Additionally, companies like Maybelline New York, Estée Lauder, Renault, Danone, Ontop Barcelona, Fnac, Nivea, DKV Seguros, Evelyn and Tele 5 have shown interest in my work. publishing companies such as Urano, Titania, Umbriel, Puck, Teide Parramón, EDB, Mc Graw or PAU Education have also expressed an interest.